Last summer, I was thrilled to have bought a little $2 bracelet at my first ever pride. One of those rubber-y livestrong types- simply in rainbow colors. I wore it for a few months until it broke, and it was a sad day. I felt balanced, with a Yarmulka on my head and a pride bracelet on my wrist.

The head covering symbolizes God's presence in my life, my reminder that he in constantly above me and the feeling that he's watching over me. Not to mention the obligation it puts on me to be a Jew and act appropriately in the eyes of God at all times. These are all things I have been taught that the Yarmulka symbolizes, and I remember it as often as I can. However, there's another part of me that is also very important. Unfortunately, people box and stereotype and pigeonhole, all of which I have discussed on here earlier, and when someone sees me in a Yarmulka they automatically make assumptions about who I am. As I have pointed out before, I like to challenge those assumptions and teach people that not everything the believe to be true is automatically, always true. For that reason I like the Pride bracelet.

This summer I bought another one, that will hopefully last a bit long than the last one. I like to show the world that I don't necessarily fit the mold and can't always be held to preconceived notions about Jews or Orthodoxy. I understand that it seems self centered and maybe crying for attention, but it's really not. It's just about having a comprehensive sense of who I am. If I have to wear the Kippah over my head at all times, I want to wear the bracelet on my wrist.
I realized today that for me, being proud is not about my sexual desires or "deviance" from "norms". However, being proud is about opposing shame. It's about telling myself that all those years of hate and shame for who I was are no longer, and all the hurt of hiding doesn't have to be true. By marching in pride, and by wearing this bracelet, I understand and in essence reach out to my high school self to tell him it's okay. I don't have to feel shame any more.
Posted by Ely Winkler 3 comments:

Last Friday, history was made in New York State as the State Senate voted to become the sixth state in the US to legalize same-sex marriages. I found this out Shabbat morning as the paper was delivered and felt my heart swell with emotion as tears began to flow. It's a beautiful thing to know that one day, I will be able to have a New York "husband", even though I do know that I will never have an Orthodox Jewish marriage to a man. I know that we will be respected with the same rights every heterosexual couple has, taxes, insurance, employment benefits and the like- the things that I grew up knowing that every normal adult heterosexual couple has to deal with, are now relevant for homosexual couples as well. It helps me feel as "normal" as I know that I am.

Sunday morning I awoke and got down to Bryant Park where I met up with many gay friends- Orthodox and non-Orthodox, to have a bagel and cream cheese brunch followed by the New York City Pride Parade. The group of us stood by 34th for about an hour or two, watching gorgeous celebrations of men, women, children and the like, show their support and their pride for the lifestyle they lead. I got caught up in emotion as Governor Cuomo, a proponent of same-sex marriage, passed by, and the crowd roared with cheers of thanks and excitement, for a politician who actually kept to his promise. The tears began to flow once again, and only continued as a car passed by with Dan Savage, and his partner Terry Miller, the founders of the "It Gets Better" project. From a distance, they noticed the contingency of Yarmulkes on the side and held up a sign that said "thank you" and pointed it at us.

Soon Congregation Beit Simchat Torah, the largest Jewish LGBT congregation in New York, passed by with their float and members of JQ Youth ran out into the streets to dance with them. I was particularly encouraged to march with a flag I borrowed from a friend- a pride flag with a Jewish star in the middle, brought directly from Tel-Aviv. The march was invigorating and exciting as onlookers were shocked to see religious individuals and people celebrating religion while celebrating their sexuality. I posed for hundreds of cameras who simply pointed to the flag in awe. By the end, my feet were killing me but my heart was full. I understood the word "pride"- from a Jewish sense and a gay sense. 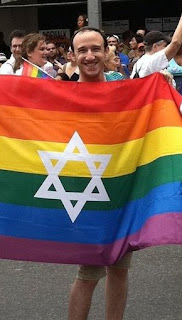 Last year, I couldn't bring myself to march. I thought it was inappropriate, I thought religion and sexuality could never be mixed. But as I have grown over the past few years, the two have finally seemed to find a resting place within me, and I couldn't be more proud.
Posted by Ely Winkler 15 comments:

Every Step I Take

Why do I do it?
I've often questioned the reasons why I stay Orthodox. And for a while, I had little to no answer. The community tries to reject me, leaders put me down, and people consistently disappoint me in the Orthodox world. So why do I put myself through this? Reasons in the past have included family, friends, just because it was all I had ever known- I didn't want it to change.

However, last week I celebrated Shavuot, commemorating the day God gave the Torah to the Jewish people. I heard a unique perspective that help me put something into words that I was never able to articulate before. I realized that while various aspects of what laws to keep and what defines "Orthodoxy" are confusing to the nth degree, being Orthodox, and identifying myself as such helps me feel part of a bigger picture. Each day I am able to belong to a strong movement of people, to a larger nation that believes in something, that has a passion and commitment that has lasted close to 6,000 years. Being Orthodox makes every step I take purposeful. Almost everything I do has the ultimate goal of betterment of myself, of humanity, and of the Jewish nation. I have the goal of being close to God at the forefront of my mind, and it's something I wouldn't trade for anything else.

I believe in God, I believe in Judaism, I have pride in that and couldn't imagine my life not being Orthodox. It doesn't seem like an option. For the first year or so of being out, I would say I struggled greatly with whether or not I was going to be religious and how I could go to a gay bar with a yarmulka. But then I envisioned a life without a yarmulka and that was an even scarier thought. It was a process and it took time.

But I wouldn't have it any other way.
Posted by Ely Winkler 7 comments:

I've been waiting for the right topic to hit me, and after a long weekend it finally did. I had a wonderful weekend. I spent Friday Night Dinner with over 250 LGBT identified Jews. Some Orthodox, some not, some older, some younger, a varying group of individuals, most of whom I was privileged to meet. It really was a great meal, with Shabbat themes and a feeling of Jewish communal warmth. The next day, I ate lunch in the park with over 20 of my Jewish and gay friends, most religious and some not, but again, a beautiful day. Saturday night I celebrated a friends birthday, and enjoyed the night out. Sunday was the Israeli day parade, but when I came home at around 5 pm, things slowed down.

I went back to my regular life, which right now is time between my school year and my summer job, and consists of hours of television watching, and going out to meet with friends. For me, too much time like this is detrimental. I'm one of those people who needs to be structured and working to feel happy and productive with their daily lives, which I do not have right now. So I sit thinking, staring at the TV and ultimately finding all the things in my life that worry me, stress me out, began to feel hopeless and helpless, and until a few friends helped me out of it, was a very painful time.

But in that time- something stuck out clear as day- weakness. I realized that for all my strength and courage, for all the support so many people in my life give me, I still sometimes feel weak. I feel confused, scared, uncomfortable, worried about so many different things in my life and thought there was no way out. But then I realized that it was okay, and that it was "normal" to struggle and even to hurt sometimes. I wanted to share on the blog, that it's okay to feel sadness and to struggle- because we all do. The important thing is to pick ourselves up and continue being strong, in spite of the struggle and regardless of the troubles we may have.
Posted by Ely Winkler 2 comments: