Recently I’ve come to the conclusions that haters are going to hate, no matter what. And usually there’s nothing you can do about it, but advocate the positive things you have to contribute instead of constantly responding to negative attacks. However, there is one constant phrase that plagued me while I was in the closet, and now follows me that I’m out. There is a popular Jewish/ philosophical concept: God doesn’t give someone a challenge they cannot overcome.

The first thing to understand is what is a challenge? Is being blind a challenge? I would say so. Is having a mental disorder a challenge? I would say yes to that as well. But is being a homosexual a challenge? From a religious perspective it certainly is, but from a sociological perspective it doesn’t have to be. But we’re on the religious page now. So if it is indeed a religious challenge, what does it mean to overcome it- To be a celibate person? To “cure” one’s sexuality? Those options don’t seem like “overcoming” anything. The deaf cannot fulfill numerous commandments of God that require listening, but are they told that God handed them a challenge and they must overcome it? No. They must do the best they can with what they were given.

I was given homosexuality. I didn’t ask for it, I didn’t go looking for it, I just felt it. Overcoming the challenge of homosexuality, to me, even from a religious perspective, means getting to a place where it is no longer a challenge. Accepting, understanding and analyzing who you are and where your attractions lie, to me, is overcoming the challenge. As I have said so many times before, it’s very easy for someone who has not struggled with sexuality to say “get over it, God wouldn’t give you a challenge you couldn’t overcome”. But until the person saying that understands this particular issue, they never really have the right to say “get over it”.

Coming from someone who did face a challenge and struggled for so many years with sexuality, let ME tell YOU, I have overcome it.
Posted by Ely Winkler 19 comments:

I started my blog the same year that a little TV show called “Glee” came on to the scene. For many years I’ve been watching, enjoying, singing along. Despite some convoluted storylines and characters, I really do enjoy my time each Tuesday night at 8. I realized that Glee provides a strong basis for what I’d like to write about.

Glee has never shied away form any controversy. Kurt came out as openly gay in season one, after first “experimenting” with one of the female characters. Last season, he was bullied and tormented until he left the school, and it was revealed that his primary oppressor was secretly gay. Many people took issue with this, just because someone bullies gay people doesn’t mean they’re gay themselves! While that’s true, there is no denying that many people who strongly and publicly advocate against homosexuals end up being involved in homosexual scandals. But, not everyone who is anti-gay is gay themselves.

This comes back to the idea of “haters” and people disagreeing with things I say. I don’t have a problem with people disagreeing with my blog. I also don’t have a problem with people presenting their opinions in the comments. However, I do have a problem with people who comment, 2 and a half years into a blog about Judaism, sexuality, and the many struggles that people have gone through, “Could I say I am an orthodox jew if I eat pork. Being Gay is not Kosher.” That is not a comment that is worth a response, this is not a comment that is worth addressing. If you’re saying this, you are not a freethinking individual; you are not someone who has ever thought about the issue in depth; you have never internalized anything I have ever wrote. So you, I call a hater.

Similarly, the individual taking gay Jewish community leaders and creating false email accounts with their names and the names of God, to spread messages like “I sympathize with the person who has homosexual urges like I sympathize with the person who has desires for underage children,” or curing gays with chemical castration, or calling gay people derogatory names and secretly mailing these messages to minors; you, I call a hater. I do not respond to this person, I do not attempt to reason with them, because people like this cannot be reasoned with.  It has taken me a long time to come to this understanding, but I finally understand that these people are not to be addressed. The existence of gay people does absolutely nothing to harm this country, so leave us alone and give us the rights of every other citizen.

As many of you know, recently, a beautiful 2 year old girl, Ayelet Yakira Galena z"l, passed away after a year of fighting for her life against a rare bone-marrow disease. Although Ayelet showed hope and strength for all of her battle, a two year old could fight for so long. Ayelet was loved and adored by her incredibly strong parents, loving extended family, who I am privileged to be close friends with, and supported by thousands. 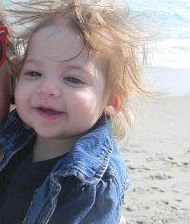 Ayelet became, as people like to say, somewhat of an internet phenomenon. Her Facebook page has over 5,000 likes, and story was tweeted over and over again by influential celebrities and strangers alike, coming together to support the cause. Ayelet's extended network set up bone-marrow drives through Gift of Life, and through the search for a match for Ayelet, 21 people found their matches as well. The 21st was on the day of Ayelet's funeral. This is power. This is social media, this is 2012. This is organizing. This is how you unite people in from all over the world in support of a cause. And Ayelet, with the help of her fearless parents, was able to do that.

The message of Ayelet, as her mother so eloquently and tastefully described on the day of her funeral, is strength. At just two years old, Ayelet has saved 21 lives, and will continue to do so even now that she is gone. The ability to take a desperate and dire situation and turn it into a life-saving movement is the power that each of us hold in our hands today. The power to change the world is at our fingertips, on Facebook or Twitter, or email or phone calls. What's important to you? What inspires you? What impassions you? Never think that what you have to say doesn't matter, or resign to giving up fighting for what you believe in. Ayelet never gave up, how can you?
Posted by Ely Winkler 2 comments: